(marketed as “groundnut oil” in the UK and India) 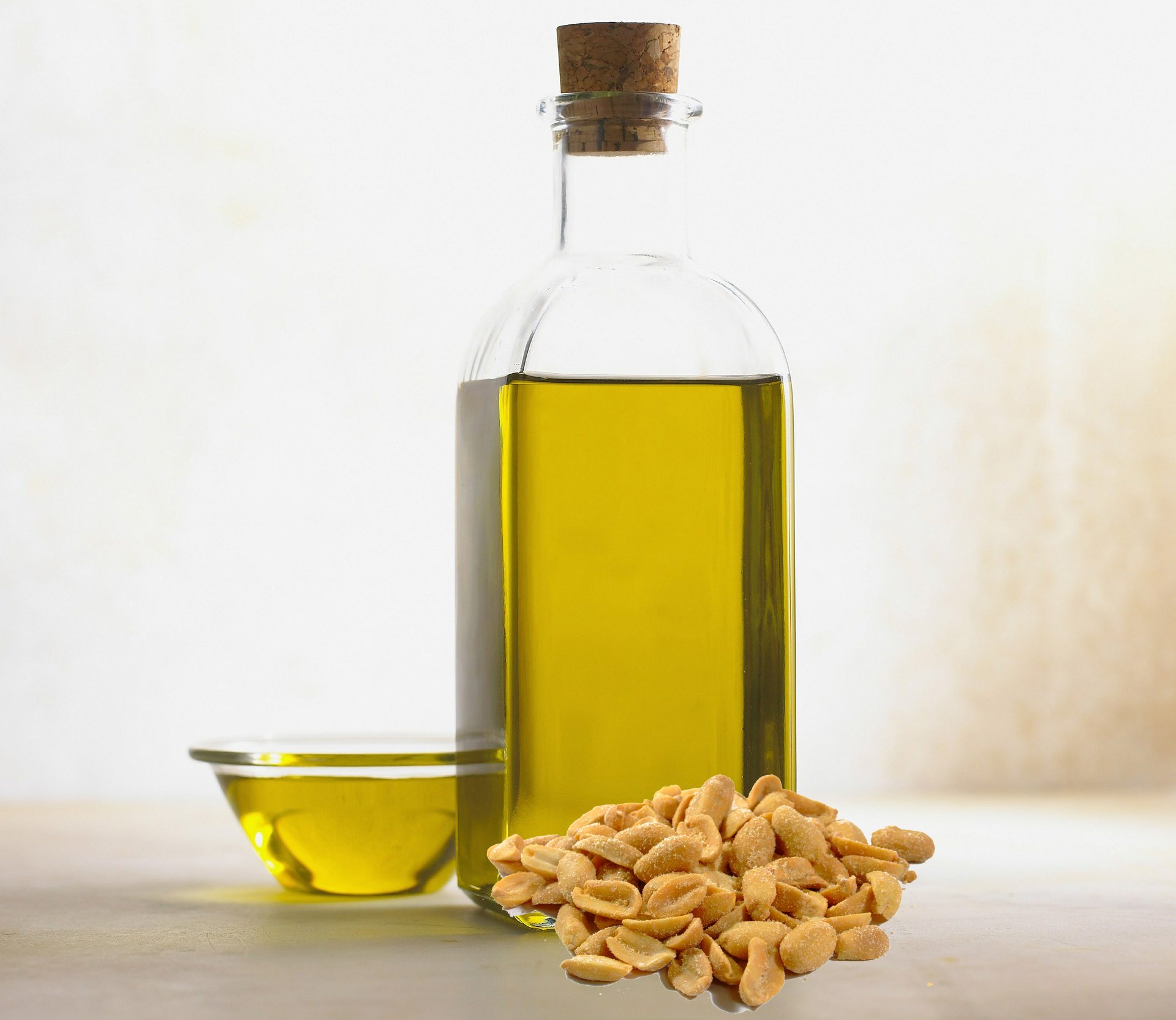 Pale-gold oil with a subtle hint of the peanut’s richness.

Peanut oil has a pretty even proportion of saturated, polyunsaturated, and monounsaturated fats, and along with vitamin E. Among cooking oils, peanut oil has one of the highest monounsaturated fat (48%) contents among cooking oils. Peanut oil has a similar percentage of polyunsaturated fat (34%) to canola oil. Its percentage of saturated fat (18%) is higher than that of other vegetable oils, but not to the point that it’s a concern for heart health and it still has less saturated fat than coconut or palm oils. The high monounsaturated content in this oil makes it a heart-friendly choice that is great for frying due to its high smoking point and neutral taste, so you can even use it to fry foods like tempura. Still, because of peanut oil’s high smoke-point, you may retain less of the oil than if you were to use something with a lower smoke point. The oil contains resveratrol, which has been studied for its protective effects against cancers, heart disease, Alzheimer’s disease, and viral infections.

Nut oils, like peanut, can be fun to experiment within the kitchen, especially since there are so many different types. It’s usually flavourful with a nutty taste and smell and cooks well at high heat. Peanut oil is one of the more flavourful oils out there. Meaning, you should probably only use it if you want your food to be peanut flavoured. It’s recommended adding it to peanut butter cookies. It is a good choice for cooking Asian-inspired meals and stir-fries, according to food experts. Like vegetable and canola oil, it is also chemically processed and fairly low in saturated fat.

Available both roasted and unroasted, peanut oil is delicious in salad dressings and sauces. Use the unroasted variety for frying because of its higher smoke point.

Made from: This is made from pressed, steamed cooked peanuts.

Best for: Use in cooking, marinades – especially for poultry, for salad dressings, stir-frying, deep-frying, sautéing, roasting, and other forms of high-heat cooking.

Not recommended for: Foods that shouldn’t taste like a peanut.

Cons: It can sometimes be chemically extracted. Pick varieties labelled “roasted,” “toasted,” or “expeller-pressed” to avoid this.

Note: Although the oil is ideal for deep-frying, just say no. Just because you can deep-fry something doesn’t mean you should. Peanut oil is also good for sautéing or can be used in sauces and dressings.

Other uses: Like a lot of other oils, peanut oil can be used in skincare, sometimes applied directly to the skin to treat dryness and eczema, and has even been shown to be helpful with joint pain. 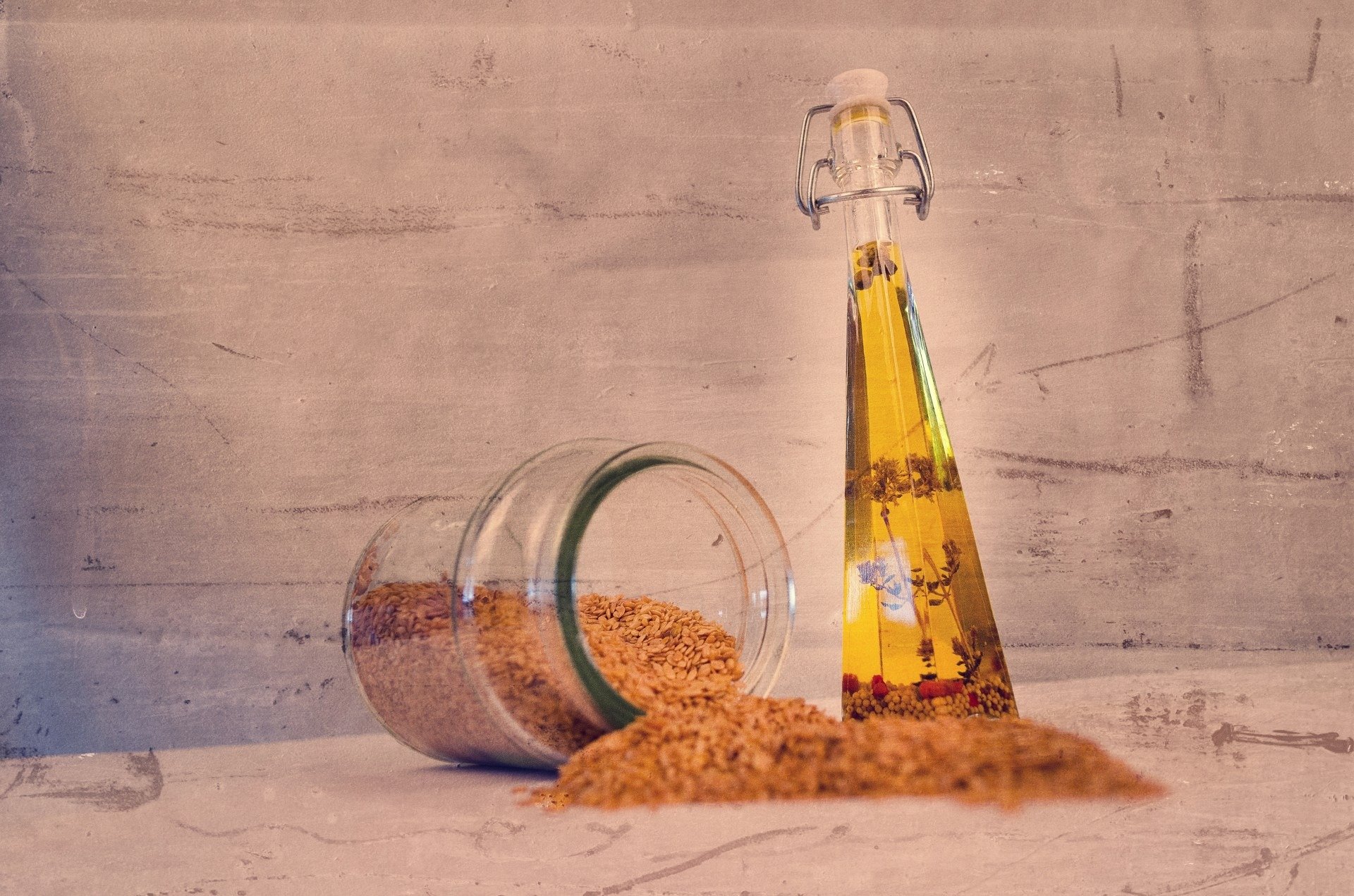 Oil pressed from sesame seeds, which imparts to it their nut-like flavour. Used primarily as a seasoning. Sesame oil lends a nutty flavour to any dish, especially toasted sesame oil, which has a darker colour and bolder flavour. It’s not usually used as a cooking fat and is often used more for its intense and potent flavouring, a little goes a long way. Sesame oil adds so much to a dish, so you don’t need to use a lot. This oil is popular in Asian dishes, dark and flavourful, this pungent oil accentuates many Asian dishes and should only be used sparingly. It is high in antioxidants and should be used anywhere you want a slightly sweet, nutty flavour. Added during the final minutes of cooking. In combination with a lighter flavoured oil, it works well in salad dressings and sauces.

And like extra-virgin olive oil, it’s cold-pressed rather than chemically processed, which makes it good for both salad dressings and sautéing. It’s a good unrefined option if that’s what you’re looking for. It has a medium smoke-point, which makes it best for light sautéing, sauces and low-heat baking. Sesame oil is rich in monounsaturated and polyunsaturated fatty acids, specifically linoleic acid, which is an omega-6, though it’s not especially high in other nutrients.

If you have a peanut allergy (or just aren’t fond of that peanut flavour), this is a great alternative to peanut oil.

Sesame oil comes in cold-pressed and roasted forms. The dark-brown roasted oil is usually sold in the Asian foods section in supermarkets. Cold-pressed sesame oil, which is light in colour and delicate in flavour, is available in health-food stores.

Made from: Oil pressed from toasted sesame seeds.

Best for: As finishing oil in soups, dressings, stir-fries, grilling, sautéing. Use light sesame oil for stir-frying, and dark sesame oil when making dressings or sauces.

Not recommended for: Foods that shouldn’t taste like sesame.

Cons: It’s doesn’t have much by way of nutrients, and it has an unfavourably high ratio of omega-6 to omega-3.

Note: If you’re checking store shelves, realize that colour impacts flavour. The darker sesame oil is bolder in flavour than the lighter version. So, depending on how robust a nutty flavour you want, choose wisely. Refrigerate sesame oil after opening it.

Other uses: Super-versatile. In India, sesame oil is often used as a massage oil on the skin, scalp and hair. It’s also used in a variety of cosmetics, soaps, insecticides and other lubricants. 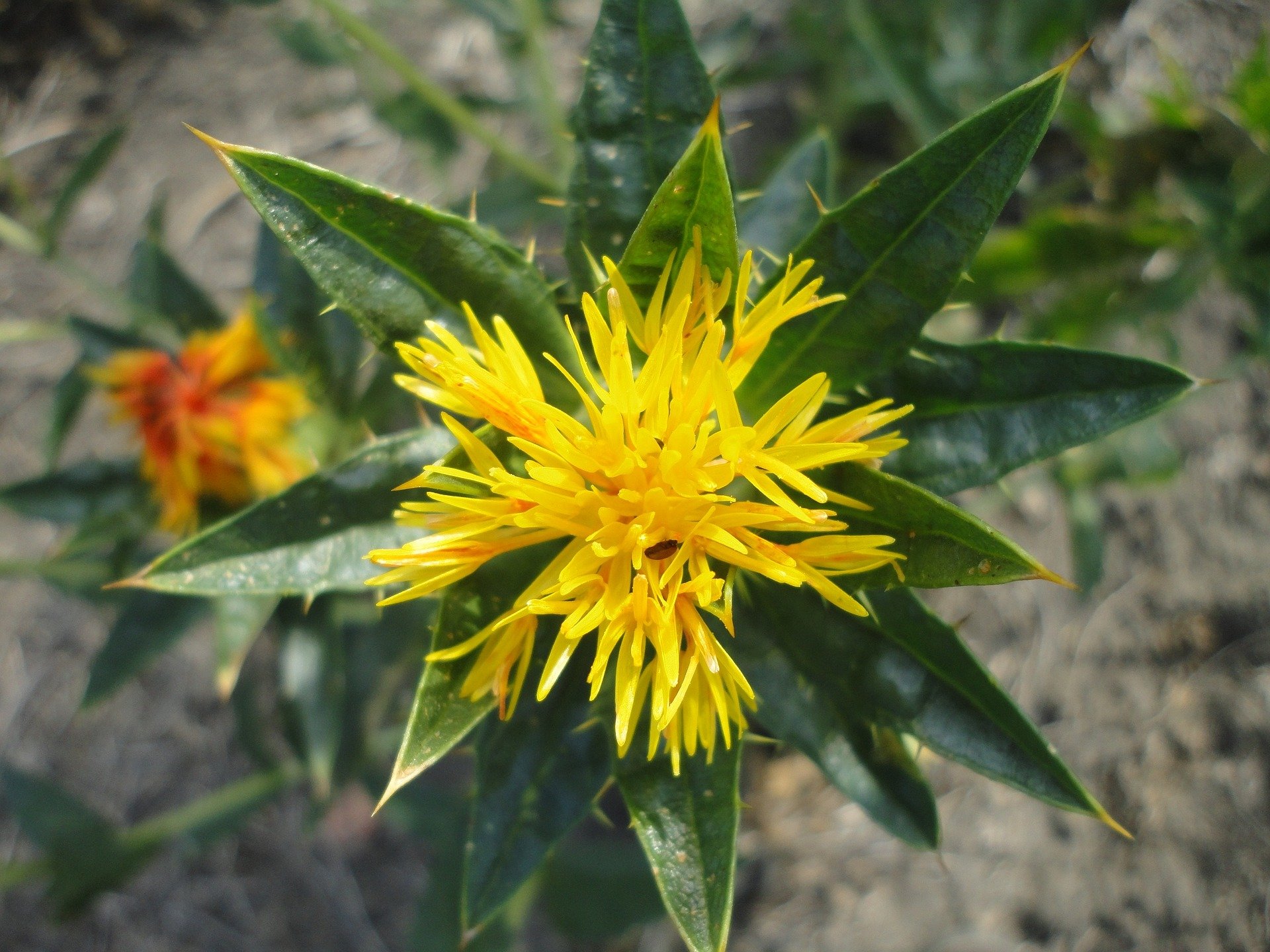 Nope, not sunflower: it’s saf–flower. This oil is made from the seeds of the plant by the same name.

If you’re still sceptical of vegetable and canola oils, may I recommend safflower oil? Safflower oil is low in saturated fats, high in omega-9 fatty acids, and it has a neutral flavour and high smoke point, making it excellent for frying, and contains more polyunsaturates than any other oil. Safflower oil is sold both chemically processed and cold-pressed like olive oil, and either version you opt for will have that same high smoke point.

Made from: from the seeds of Safflower

Not recommended for: Salad dressings.

Pros: Safflower oil can tolerate both high and low temperatures.

Cons: It does not provide any flavour. Nutritionally, safflower oil lacks a vital vitamin provided by other oils but is a better choice than other types of fat.

Note: Use safflower oil when you don’t want an overwhelming flavour to your dish, like in a stir-fry, curry or in any variety of baked goods.

Other uses: One of the oldest crops in our history, safflower has also been used in dyes. One pharmaceutical maker even tried using this plant to make human insulin but said the company is now defunct. 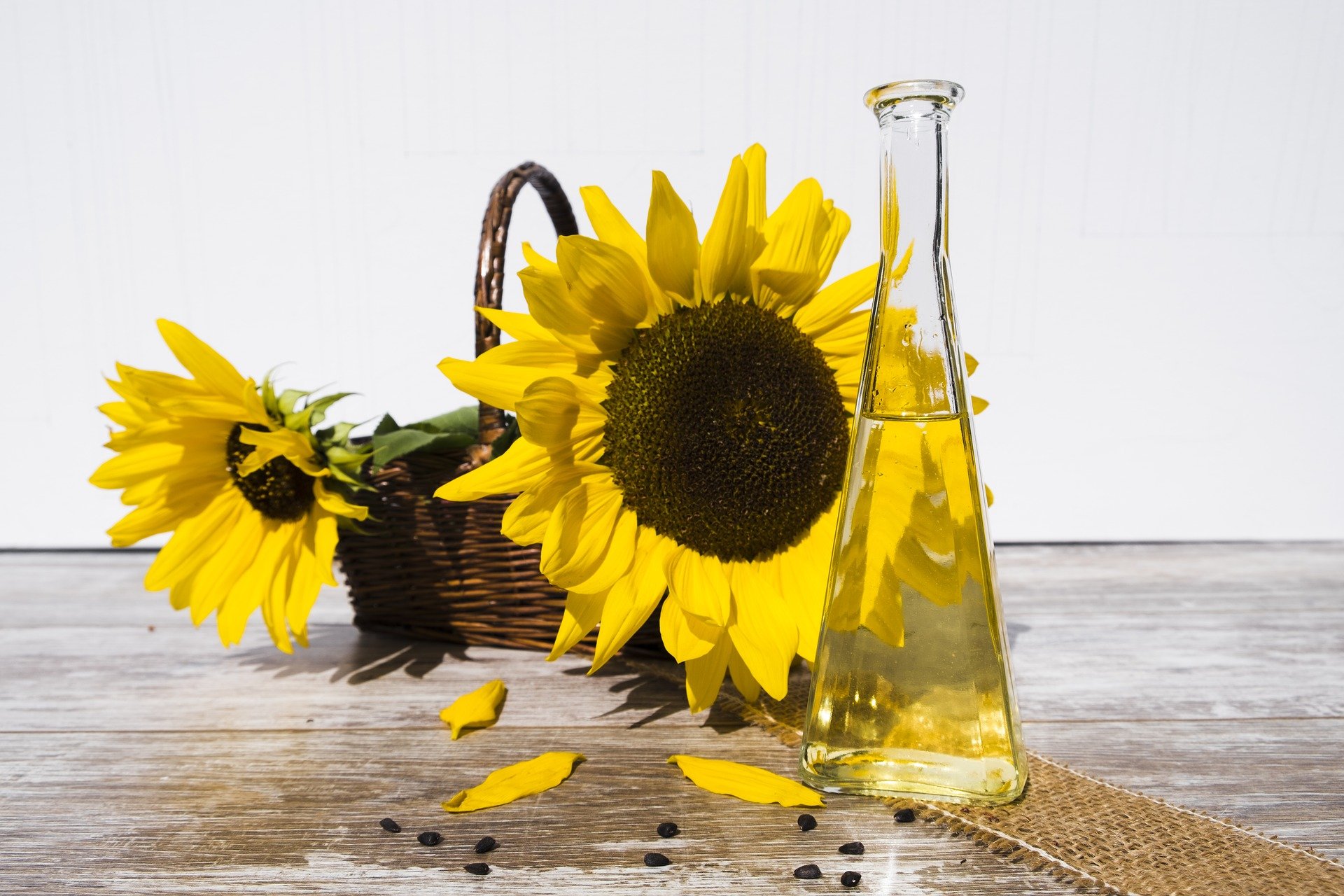 Pale, relatively flavourless sunflower oil has a light taste and appearance, which makes it a versatile ingredient used in salad dressings and for cooking oil.

Made from the same sunflower seeds you like snacking on, this oil is a favourite both in food and for frying. Sunflower oil is low in saturated fat and sunflower oil is higher in antioxidant vitamin E than any other oil; one tablespoon contains 28% of a person’s daily recommended intake of the nutrient, so drizzle this to employ some free-radical-fighting powers. It is the oil of choice for many health brands.

Sunflower oil is a good all-purpose oil to have in your kitchen because it can withstand high cooking temperatures. It has a high smoke point so it stands up well to heat and doesn’t have a strong flavour, which means it won’t overwhelm a dish. It can also be used in low-heat cooking methods or in a sauce or as an ingredient in sunflower seed butter.

Shoppers may also see “high-oleic” versions of sunflower or canola oils on supermarket shelves or high-oleic oils listed on the ingredient lists of processed foods. These oils have been modified to be richer in oleic acid, which boosts their levels of monounsaturated fat. High-oleic sunflower oil, for example, would have a fatty acid profile that would more closely resemble an oil that is mainly monounsaturated fat, like olive oil, than it would conventional sunflower oil.

Food manufacturers are turning to high-oleic oils as a replacement for trans fats, which are hydrogenated oils that can extend processed foods’ shelf life, according to nutrition experts. As manufacturers eliminate their use of unhealthy trans fats, high-oleic oils have taken their place because these mostly monounsaturated fats are more shelf-stable than polyunsaturated fats.

Made from: pressed from sunflower seeds

Best for: as a substitute for canola oil, frying, salad dressings, and baking for muffins and cakes.

Pros: This oil has both a high smoke point and a neutral flavour that lends itself well to lots of dishes.

Cons: It’s comprised of almost entirely omega-6 fatty acids with no omega-3. The body needs them, but omega-6s are thought to be pro-inflammatory, while omega-3s are anti-inflammatory. Consuming too many omega-6s without balancing with omega 3s, could lead to excess inflammation in the body, so moderation is key.

Other uses: Again, you can keep this one on hand for skincare woes, too. Sunflower oil is sometimes used as a massage oil or as a topical treatment for wounds, psoriasis or arthritis.